Today is October 3rd & a Wednesday!

If you’ve been living under a rock, and don’t know what I am talking about, today is double amazing to anyone that is a fan of the movie, and now Musical, Mean Girls.

To celebrate, I am sharing with you a super easy pink makeup AND a review of the Mean Girls on Broadway.

Let’s start with the makeup. Here’s what I used: 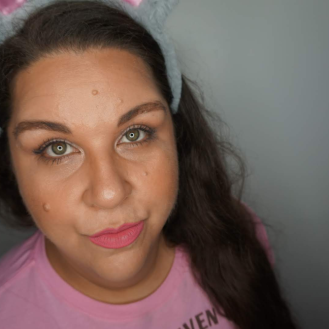 A pink look to go with my all pink outfit when I went to watch Mean Girls on Broadway.

Speaking of the musical, let’s talk about it a bit. Usually, when they turn a movie into a stage show, it scares me a little. Specially a beloved movie like Mean Girls. It’s cult following it’s unreal. I horribly LOVE this movie and seriously quote it at least once a day (not kidding). So going into the theater, I wasn’t sure what to expect. I half expected it to be horrible.

BUT I was highly surprised. The cast was filled with insanely powerful singing voices. The score was entertaining and filled with super catchy tunes I’ve been listening to on repeat.

Although they did change the story a bit (kind of expected it to adapt it to the stage), the cast was pretty true to the movie and was a little bit in love with each of them. Top of the list for me were Janis (Barrett Wilbert Weed), Damian (Grey Henson), Karen (Kate Rockwell – she’s perfection), and Kevin G (Cheech Manohar).

The stage set up was pretty simple, there weren’t really any props. Everything were displayed on the large screens that covered the entire stage. Any props were usually rolled it in and out by the cast.

Going back to the cast, Taylor Lauderman who plays Regina, looks just like another pretty blonde. BUT her voice blew me away! Really when she belts out “Someone Gets Hurt”, I had to pick my jaw off my pink skirt. Even the guy behind me was heard saying, “Damn!” Damn was right!

Also Erika Henningsen (Cady) has a voice that makes me so damn happy. It’s a mix between Ariel (Little Mermaid) and Anna (Frozen). The tween living within me was chair dancing with my mouse ears.

The song that will have you screaming girl power, and throwing your pink feminist fist in the air is Janis’ solo, “I’d Rather Be Me”. Barrett Wilbert Weed was born for this role. She’s incredible!

I’ve also been listening to the tracks “Stupid with Love”, “Revenge Party”, and “I See Stars” on repeat. They are damn catchy. Have you heard the soundtrack? You should!