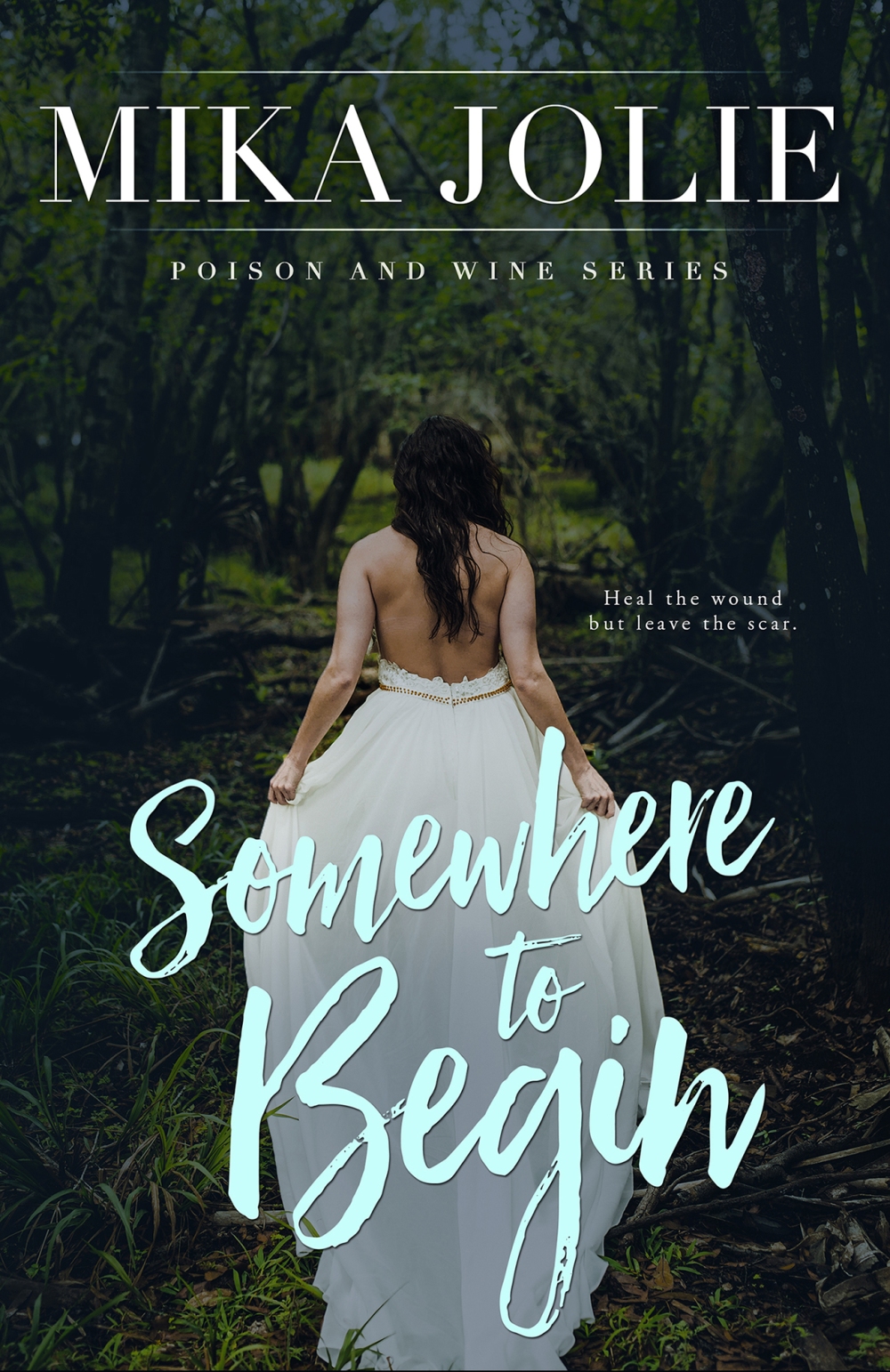 SOMEWHERE TO BEGIN
By Mika Jolie

There are wounds that never show on the body.

For twenty-nine years, Colbie Bennington does as expected with an eternal smile stained on her lips. The biggest chances she’s ever taken can be counted on one hand, three fingers to be exact—her battered red chucks, painting her toenails a vibrant blue, and her wedding dress. Always the dutiful daughter and a Stepford fiancée, she has never acted on impulse, never been in love.

On her wedding day, Colbie ends a toxic relationship, drops the fake smile, and says, “I can’t do this anymore.”

Navy SEAL Zander Serrano returns home broken and burdened with a volcano of remorse. Too trapped in a mental war to be at peace and too damaged to be at war, he shuts the world out. The last thing he expects is to feel, especially for a runaway bride with her own baggage.

Two empty hearts marred in different spots find themselves drawn to one another. Each with their own scars. Some, the world can see. Others, unseen to the naked eye.

They say two broken people should not be together. But for Colbie and Zander, their attraction is undeniable, unexpected.

Can two souls with fractured parts be the best cure for each other’s wounds?

Starting over is never easy, but sometimes in life, everyone needs somewhere to begin.

Have you ever read a book that you can’t get over? Days go by and you can’t shake it? This is what Somewhere to Begin by Mika Jolie is for me. Even days after finishing it, I just wanted to go back to that world and I couldn’t let go. I literally forced myself to read another book just so I could move on.

I’ve said this in previous reviews, but is so beyond true for Colbie and Zander, they are two extremely broken people that find each other at the worst time in their lives.

Fear has been all Colbie has known pretty much all her life. Fear of not having her parents approval. Fear of her sad, loveless life. Fear of the actual man that she’s promised to marry. It takes everything in her power to walk away from him at the altar. And in her fleeing, she literally ran into Zander.

Zander is a wounded hero. I can’t even get into the mind frame of someone that has given so much to defend his country. The constant pain. The constant struggle. He’s a broken man all around. I remember the Zander we met in the Martha’s Way series. This is not the same man. He was lively, and sexy as sin with a dazzling smile that dropped panties wherever he went. This Zander is a man that’s been to war and seen things we can’t even imagine. His guilt is worse than his actual injury.

There’s something about recognizing a broken soul, and finding someone that knows your pain, that although you are hurting and can’t go on, you don’t feel so alone. And that’s what these two are for each other, sadness and salvation.

Mika writes a devastatingly beautiful stories. Her characters touch places in your soul you never knew existed and you want more of. And demand more of. I can not wait for Rafa’s story, but I don’t think my emotions are ready for that mess, yet I need it in my life.

I give Somewhere to Begin five nerd glasses out of five. This book will make you laugh and cry and feel. Do yourself a favor and read it.