It’s Election Day in ‘The States’. And I can’t think of anything more American than Apple Pie. So here’s a couple of great recipes for you!

Prepare the filling: Peel, halve and core the apples. Cut each half into 6 wedges and toss with the sugar and lemon juice in a bowl. Melt 4 tablespoons butter in a large skillet over medium-high heat. Add the apple mixture and cook, stirring occasionally, until the firmer apples begin to soften but still hold their shape, 8 to 9 minutes. Sprinkle with the flour, cinnamon, clovesand nutmeg and toss until the juices begin to thicken, about 1 minute. Remove from the heat and cool completely. (The filling can be made up to 2 days ahead; cover and refrigerate.)

Make the dough: Pulse the flour, sugar and salt in a food processor until combined. Add the shortening and pulse until it disappears, about 30 seconds. Add the butter and pulse until the mixture looks like coarse meal with pea-size bits of butter. Beat 1 egg with 1/4 cup ice water in a bowl, then add to the processor and pulse once or twice. (Stop before the dough gathers into a ball.) Lay out 2 sheets ofplastic wrap; divide the dough between the sheets and pat each into a disk. Wrap the disks tightly and refrigerate until firm, at least 1 hour.

Lay the dough over the filling and press the 2 crusts together around the edges. Fold the overhanging dough under itself and crimp with your fingers. Beat the remaining egg in a bowl and brush over the top crust; sprinkle with sugar. Pierce the top with a knife a few times to let steam escape. Chill 30 minutes.

Preheat the oven to 375 degrees F. Place the pie on a baking sheet; bake until the crust is golden and the filling is bubbly, 55 to 60 minutes. (Cover the edges with foil if they brown too quickly.) Transfer to a rack and cool until set, 2 hours. 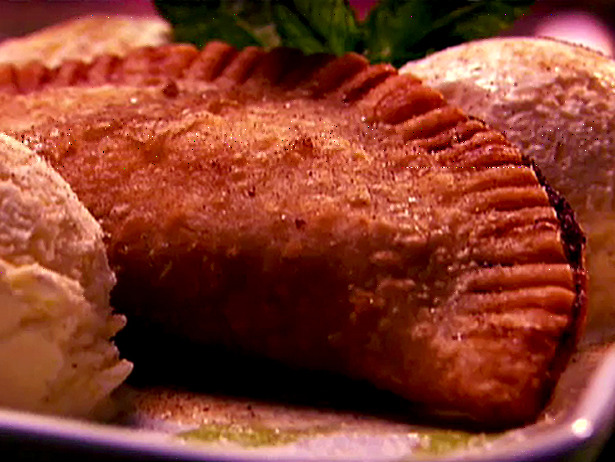 To a large saute pan over medium heat, melt the butter. Stir in the brown sugar, and the apples and saute until they are tender, about 5 to 6 minutes. Drizzle in the maple syrup, lemon juice, cinnamon, ginger, and nutmeg. Continue cooking for 5 minutes more until the apples are completely softened. Remove them from the pan and allow them to cool while you prepare the dough.

Roll out both pieces of pie dough onto a floured surface. Cut out 8 (6-inch) circles and lay them out onto a parchment-lined sheet tray. Put a heaping tablespoon of the apple pie filling into the center of each round Fold the circles in half and seal their edges with the tines of a fork.

In a deep-fryer or heavy-bottomed pot, heat enough peanut oil to come halfway up the sides of the pot, to 350 degrees F.

Whisk together the sugar and cinnamon in a small bowl and reserve.

Fry the pies, 3 at a time, in the hot peanut oil until they are golden brown and crisp, about 3 minutes. Transfer the finished pies to a paper towel-lined sheet tray. Once they are cool, toss them in the cinnamon sugar and serve with vanilla ice cream.