For 47  years (there might be a slight exaggeration on the time frame here), I’ve been talking and teasing about Kylie Scott’s new book series, Dive Bar. I know, it seems like I’ve been talking about the release for an eternity and a day. But guess what you guys!? It’s finally released!!!

As a rule, I try not to get too overly excited with new book series from my favorite authors. Yes, I’ve been horribly disappointed in the past, so I try to separate one world from another. It’s a good rule. It works for the most part. However, Kylie’s new series, ties to her Stage Dive books. As a matter of fact, it takes places in the hometown where the member of Stage Dive were born and raised. Still I did my best to give this series the chance it deserves without comparing it to her previous work.

To say that I read this book in a span of 24 hours while having a million things going on, is an understatement. I could not put it down. But before we get to that, if you haven’t gotten tired of me sharing the book info, I’m going to give it to you again, because sharing is caring. 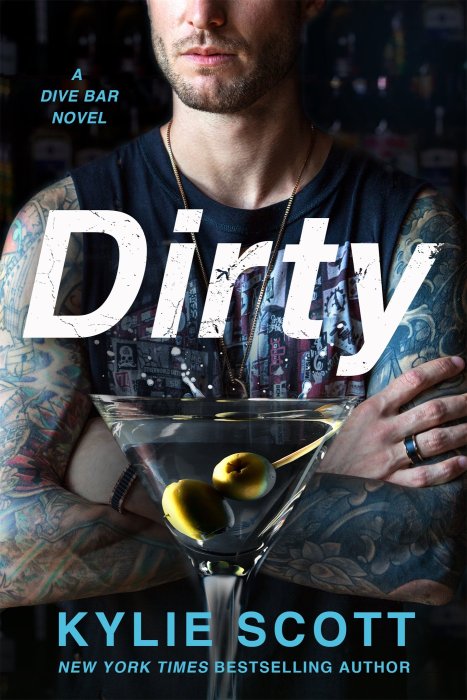 Are you ready to get Dirty?
Dirty is Book One in Kylie Scott’s Dive Bar Series.
Meet Vaughn & Lydia today!

The last thing Vaughn Hewson expects to find when he returns to his childhood home is a broken hearted bride in his shower, let alone the drama and chaos that comes with her.

Lydia Green doesn’t know whether to burn down the church or sit and cry in a corner. Discovering the love of your life is having an affair on your wedding day is bad enough. Finding out it’s with his best man is another thing all together. She narrowly escapes tying the knot and meets Vaughn only hours later.

Vaughn is the exact opposite of the picture perfect, respected businessman she thought she’d marry. This former musician-turned-bartender is rough around the edges and unsettled. But she already tried Mr. Right and discovered he’s all wrong-maybe it’s time to give Mr. Right Now a chance.

After all, what’s wrong with getting dirty?

As I read this book, all I kept thinking about was how the title was so fitting. Because love, is a dirty-dirty business.

When Vaughn and Lydia meet, they are both a flipping mess. They have both hit rock bottom. Vaughn is broke, his career as a rock god has ended, and he’s about to lose his childhood home.

Lydia, just discovered that her entire relation with the man she “loves” has been a sham all along, and he’s been cheating on her with his best-friend and best-man.

These two are a freaking mess. They are like a tornado and hurricane crashing into each other. And when they’d crashed, they made a one of a kind storm. They had nothing to offer, except to be there for each other. And some how, in some way, they were exactly what they needed.

In each other they found friendship, partnership, and for Lydia, the home and stability she never had. For the first time in her life, she had friends, and a place where she felt at home. And Vaughn found someone he could share his childhood home with.

But don’t let my romanticism get in the way of how freaking hot these two are. Boy were they hot. So hot, I actually tweeted this:

Thank you @KylieScottbooks I am now depressed. Why can't real men be like the ones she writes?

What I love about the way Kylie writes is that, yes it’s first person, BUT you don’t feel like you’re missing out on anything. Plus, she does an awesome job with her secondary characters. I can not begin to tell you how I can not wait for the rest of the cast to meet their Happily Ever After (HEA)! Some day though, I want her to write from the guys point-of-view (POV) instead of the woman.

Ok I’ll stop rambling about how much I love this story. And it’s no shocker to anyone that I am giving it 5 Nerd Glasses out of 5.

UPDATE | Throughout the day, I’ve been sharing a few of my favorite book quotes on our instagram. Choosing just a few, was almost impossible. So many great lines in this book. We hope you enjoy these!

According to the Urban Dictionary, a Lumbersexual is a Metro-sexual who has the need to hold on to some outdoor based rugged-ness, thus opting to keep a trimmed beard. 😂😂😂 This is how Lydia describes Joe, one of the Dive Bars bartenders you meet in @kylie_scott_books new book, Dirty. Read our review and check out the blurb and book cover for Joe's very own book, Twist, in the link in profile | Background 📷 Credit: @iamsamcharris • • • #BookieThursday #book #books #bookie #booknerd #bookworm #instabook #bookstagram #ilikebigbooksandicannotlie #reading #ilovetoread #bookblog #readingblog #happyreading #bookaholic #review #bookreview #nerdandlace #kyliescott #dirty #divebar #divebarseries #bookseries #cover #bookcover #coverreveal #bookblogger #bookblurb #wordoftheday #lumbersexual

Sometimes, you just need girlfriends around to have a drink and enjoy being in the moment. Lydia Green never had that in her life, until she purposely-on-purpose fled her wedding, jumped a fence, broke into Vaughn's house and pretty much became a hurricane in his life. Get to know Vaughn and Lydia in Dirty by @kylie_scott_books. Check out our review in the link in profile | Background 📷 Credit: @iamsamcharris • • • #BookieThursday #book #books #bookie #booknerd #bookworm #instabook #bookstagram #ilikebigbooksandicannotlie #reading #ilovetoread #bookblog #readingblog #happyreading #bookaholic #review #bookreview #nerdandlace #kyliescott #dirty #divebar #divebarseries #bookseries #cover #bookcover #coverreveal #bookblogger #bookblurb #quote #bookquote

BUT WAIT! There’s more… As a special treat, we have for you today the cover release and a blurb of the second Dive Bar novel, Twist.

When his younger brother loses interest in online dating, hot, bearded, bartender extraordinaire, Joe Collins, only intends to log into his account and shut it down. Until he reads about her.

Alex Parks is funny, friendly, and pretty much everything he’s been looking for in a woman. And in no time at all they’re emailing up a storm, telling each other their deepest darkest secrets…apart from the one that really matters.

And when it comes to love, serving it straight up works better than with a twist.

Haven’t gotten Dirty yet? We’re here to help! Get your copy today.

Have you read Dirty? Sound off below or on instagram and let us know your thoughts.