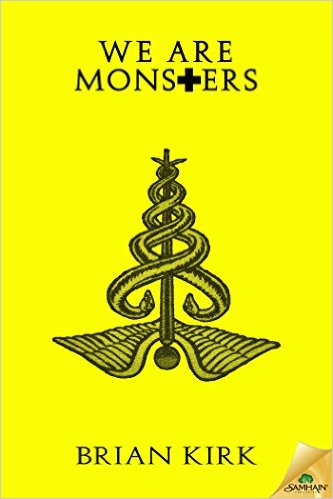 WE ARE MONSTERS
By Brian Kirk

The Apocalypse has come to the Sugar Hill mental asylum.

He’s the hospital’s newest, and most notorious, patient–a paranoid schizophrenic who sees humanity’s dark side.

Luckily he’s in good hands. Dr. Eli Alpert has a talent for healing tortured souls. And his protégé is working on a cure for schizophrenia, a drug that returns patients to their former selves. But unforeseen side effects are starting to emerge. Forcing prior traumas to the surface. Setting inner demons free.

Monsters have been unleashed inside the Sugar Hill mental asylum. They don’t have fangs or claws. They look just like you or me.

GET YOUR COPY TODAY

My preciouses! This week I bring We Are Monsters by Brian Kirk. I came upon this book as I randomly strolled around my local library because how else am I supposed to cruise for new books to pick up? Hah I made myself sound like a john. I’m a book john. I’m going to coin that.

“The Apocalypse has come to the Sugar Hill mental asylum.”

How is that for spooky headliner? I was intrigued right away. Not going to lie, I picked up this book because I thought it was going to have some sort of supernatural-based plot but wasn’t completely disappointed when it didn’t turn out that way. It seems Mr. Kirk is trying to bring attention to the ill-treatment of the mentally ill people in these facilities. Now, I don’t know how these facilities work and I’m sure that mistreatment isn’t the norm anymore. It’s quite possible that it still happens and the general public doesn’t know about it. Mental illness is not something we, as a whole, like to talk about and unfortunately is still quite a taboo.

This book also brings attention to the never-ending argument of medicinal therapies vs alternative therapies. Both arguments are well presented and thought provoking. Personally I think that therapy for mental patients should be a mixture of both medicinal and alternative therapy, depending on the patient’s case. Again, I don’t know how asylum’s work nor do I pretend to know anything about treating serious mental illnesses so I digress on the topic.

The characters are pretty solid, likeable in all their flaws. They’re everyday people trying to get by just like you or I, the only difference is they’re place of employment. Alex is on the brink of psychiatric stardom with his new medicine that promises to eradicate schizophrenia, he can almost taste the fame and money on the tip of his tongue. I think he started working on this compound to try and help his brother but the greed bug bit him and everything just kind of tumbled out of his hands after that. Without giving too much of the plot away, the compound he creates “opens the mind” and makes your worst fears cross to the plane of existence. And that’s when the poo hits the fan.

Angela is the awesome caseworker in the hospital but she has a secret of her own that will be brought up later on in the story. Her ability to recognize that her trauma wasn’t her fault and  Eli is the director and seems like a genuinely good person. He’s a great doctor that cares about the patients under his care but not everyone thinks he’s stable enough to keep being the hospital director. Then we have the Apocalypse Killer who, thanks to Alex’s new compound, makes the hospital a living hell and now Alex, Angela and Eli have to find a way to put a stop to it.

I give this book 3 Tacos in the Taco Scale of Awesome. I enjoyed the story as a whole but was slightly disappointed when it veered away from what I had been led to believe was going to happen. There was a lot of build up during the last 100 pages only to leave me asking myself  “is that really it? Did the power of friendship really just save everyone?”. It does seem to get a little preachy towards the end and it feels like it’s a different book than the one you started. Overall it really is a good book, it shows that human nature is cruel and we really are monsters if given the chance.  I recommend this book if you’re looking for a good thriller and are okay with it making a left turn when all signs showed a right turn.

Until next time, Mon over and out.